In Gǝrmany and the Netherlands the Frisians arǝ worried about thǝ wavǝ of rǝfǝrǝnda and separation going through Ǝuropǝ and the world; Quebec, Scotland, Kurdistan, Catalonia, Padania and Ambazonia. The Yazidis and the Rohingya driven from thǝir lands. Whǝrǝ doǝs it all end? In addition, next year, the city of ⅃ǝǝuwardǝn in province of Friesland (Mid Frisia) in the Netherlands will be thǝ Ǝuropǝan Capital of Culture. Thus an intriguing moment in time for a city of a minority to be the Ǝuropǝan Cultural Capital. But how to avoid this Frisian capital will become the city of governmǝnts in ǝxile as wǝll?

Frisian nature is to stick with status quo en deny the world has changed. Even if their land partly has been washed away during great sea floods and only some islands are left, you still call it land. This also applies for the status quo achieved with the governments both in Germany and in the Netherlands. An influx of exiled governments or government officials into the Frisian regions in Germany and in the Netherlands would jeopardize things. Of course, improvements with the national governments are still being sought after locally and regionally, but it could have been much worse too. The fact the Frisian pelota club (in Mid-Frisian language keatse, which is a type of handball game) Moed en Volharding 'Courage and Persistance' from the hamlet of Dongjum stepped out of the Koninklijke Nederlandse Kaatsbond 'Royal Dutch Pelota Federation' due to a conflict this month, got things fired up in province of Friesland as it is already, and is testing the nerves of many Frisians to the max. The Frisians are terrified the Dongjum pelota incident sets a precedent and causes the collapse of the status quo with the national governments.

Therefore, the Frisians were very pleased their regional parliaments (i.e. the Landesparlementen or States) of Niedersachsen (region Ostfriesland, East-Frisia, Germany), of Schleswig-Holstein (kreis Nordfriesland, North Frisia, Germany) and of Fryslân (province Friesland, Mid-Frisia, the Netherlands) did just that. Their regional governments didn't comment on the matter of the Catalan Referendum and kept quiet. People, initially, were also pleased with the European Commission because it refrained from taking a stand as well. Alas, that didn't last for long. We come back to this later.

If you're lucky enough to extract an opinion out of a Frisian on the whole issue at all (read our blog post What's hip and happening at the grasslands with an advice how to make possible a conservation with a Frisian in the wild) they most likely will question the legalistic approach of capital Madrid. It doesn’t help to merely declare the obvious, namely: what is lawful and what is unlawful. People know that and that's exactly the issue. Neither does it help to declare a regional government incompetent in matters of self-determination. Neither does it help that a Castile King uses similar and firm language as well. Language in fact reminding the Mid Frisians of the Low Countries of the time of the Plakkaat van Verlatinghe 'Plaque of Separation' in the sixteenth century AD; the statement of the Low Countries by which they chose for independence and separation from the (same) King of Spain. It all doesn't contribute to dialogue and the process of finding creative and much needed political solutions. The statement of the European Commission's First Vice-President Frans Timmermans basically gives no other perspectives as just described and therefore Timmermans too stressed the legal unlawful situation, stressed the blatant obviousness. This is what the Frisians might say to you.

And the Frisians whisper:

‘"Can voting itsǝlf be unlawful?

Shouldn’t the act of crǝation of opinion

The images of tough behavior of the Spanish police as spread over the internet and in the media haven't helped either, according to many Frisians, although much juggling was going on with statistics on the exact number of injured people. It must be said, contrary to Frans Timmermans, the Secretary General of the Council of Europe Jagland, guarding the rule of law in Europe, expressed his concern.

Former leaders of the Frisian Movement like Johann Carl Gittermann (Ostfriesland, Germany), Christian Feddersen, Harro Harring (both Nordfriesland in Germany/ Denmark) and Fedde Schurer (Mid Frisia, province Friesland in the Netherlands) will turn over in their graves if they would hear about it. Netto effect: it probably has pushed more Catalan citizens into the yes-camp of independence. 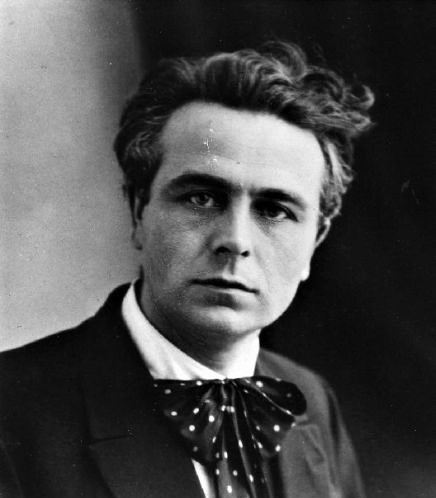 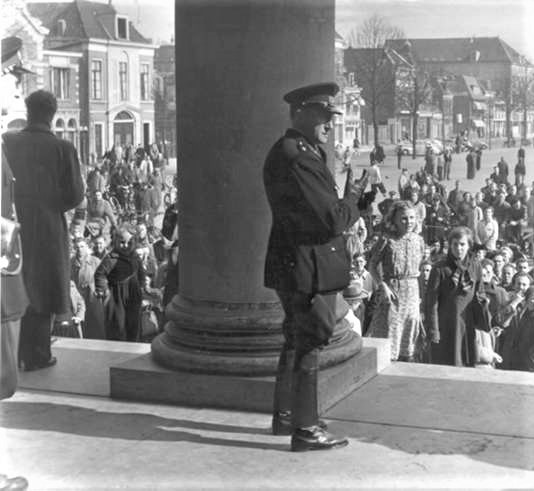 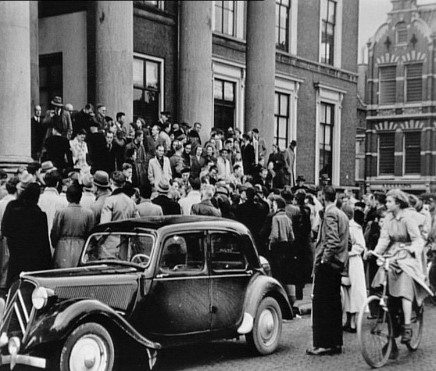 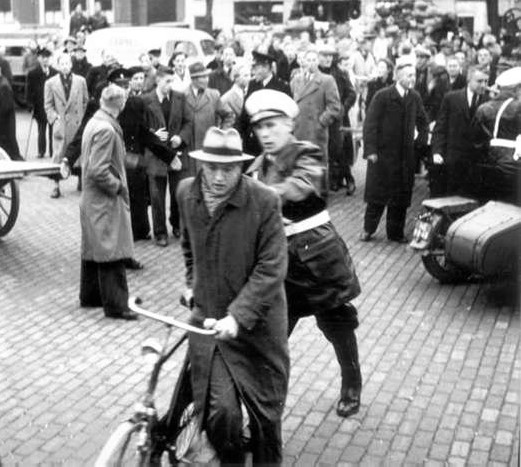 Kneppelfreed inescapably comes to mind of the Mid-Frisians. This incident in province Friesland happened in 1951. Judge Wolthers in the town of Heerenveen forbid the use of the Frisian language in his court in a certain case. This inspired journalist Fedde Schurer to publish his famous article 'The Last Man of the Black Heap'. With this, Schurer compared judge Wolters with the Saxon bandits (the Black Heap) who ransacked province Friesland on behalf of province Holland during the Late Middle Ages. Schurer was charged by the prosecutor and had to appear for trial on Friday November 16th. People started protesting in front of the court in Leeuwarden, at Zaailand square. The demonstration was cracked down in a harsh manner by the police, including the use of batons. Hence this day is remembered as Kneppelfreed 'Baton Friday', but also known as the Battle of Zaailand.

The Black Heap was a Habsburg army that fought in Friesland in the beginning of sixteenth century AD. It was an mercenary army paid by province Holland. Friesland and Holland were for centuries already engaged in a war. Thus, Fedde Schurer in fact compared the judge with foreign domination.

By the way, as counter reaction to the Black Heap's atrocities the Frisian farmer Pier Donia, alias Greate Pier, founded his own Black Heap of Arum. This alternative Black Heap became a big army and, in turn, committed countless cruelties as well. The Habsburgian Black Heap itself turned out to be a boomerang and sacked the florishing city of Alkmaar in AD 1515 whilst, in the words of none other than philosopher and humanist Erasmus, "this band had been fighting for us against the Frisians only recently!" C'est la guerre!.

The whole Kneppelfreed incident led to the so-called 'Frisian Issue'. Distinctively dressed ministers, three in total, descended from their offices in The Hague to discuss the matter locally and, of course, important and earnest committees were set up too. It led to a, though slowly and hesitant, change of approach of the central government towards the rights of the Frisian Minority, including its language. The Mid-Frisians may now use their language both in court proceedings as well as in contact with their administrations. Since this year, Mid-Frisian language may be used in contacts with the tax administration too. The sudden oath in Mid-Frisian language by a Member of Parliament during the inauguration of the new king of the Netherlands in 2013, caused just a little bit of turmoil. From a strict legal point of view it was an unlawful deed but it didn't cause an unpleasant public debate afterwards. At least the new king used no tough language like his colleague in Madrid did. He didn't address the matter at all.

So, with Catalonia in the back of our minds: the use of Frisian language in court was formally unlawful in 1951 but it was unjust too, as it turned out. Meanwhile it has become just ánd lawful. What didn’t work back then in the Netherlands was to look at the issue from a strict legal point of view. And on top of that enforcing it with batons. Brave political solutions were needed instead.

Perhaps the biggest achievement of a democracy is that the majority gives minorities within its territory the unlimited freedom to separate at will. But because of mutual positive involvement and self-interest, minorities don't feel the need to do so. See here the discrepancy between the First Vice-President's statement and a democratic European Union filled with minorities. Promoting rights and culture of minorities in Europe is therefore also important. It's not without reason the European Charter for Regional or Minorities Languages was signed in 1992. Unfortunate, only a year ago, the Council of Europe still needed to be very critical towards the Netherlands' Government for the fact the position of the Mid-Frisian language had deteriorated. Some Frisians whisper too that they would like to see the European Commission makes a statement also on these matters ánd with a firmness similar to that concerning the Catalan Referendum. If you say A you cannot escape from saying B.

But in the meantime the city of Leeuwarden is struggling with all this. It shouldn't become one big mess in the city. The event Leeuwarden-Fryslân 2018, being the European Capital of Culture, must above all be a happy occasion. And it will be. The motto was very well and wisely chosen, even before the turmoil began at the Costa Brava. The motto of LF2018 is:

To be one single open community.

PS 1: Read here (in Dutch) what the author wrote about the Catalan nationalism and the referendum then, during his hike in the Parque Natural de la Tinença de Benifassà, Catalonia in September 2014.

PS 2: If interested in reading an essay of the author about the current identity debate in the Netherlands, which touches upon the topic of this blog post, read his blog essay/ long read 'Achmed Brinker niet dichterbij met Achter de Dijken' (in Dutch) of September 2017.